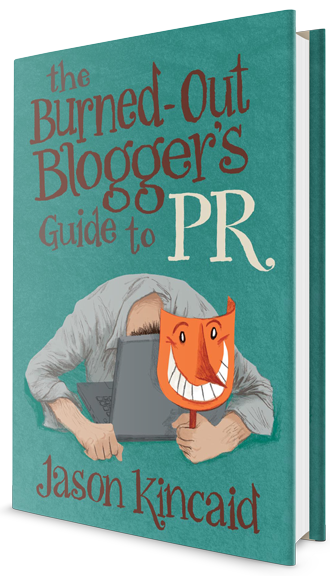 The Burned-Out Blogger's Guide to PR

For four years as a reporter at TechCrunch, hordes of brown-nosed PR people drove me nuts.

Learn how to use key journalistic terms — and why no one is really sure what they mean.

A promise reporters make to write about you when you ask them to. Until everything goes to shit...

You, too, can be part of a story you're not really part of.

Someone needs a hug.

Why Do I Care About Press?

Some founders have the idea that getting covered in a major publication is a golden ticket to fame and fortune. Others think that press is nice validation and is good for filling bare office walls, but is mostly a distraction. Neither are right, but between the two, I’d bet on the latter.

You’ve probably heard of Words With Friends. The online Scrabble-esque game has since seen its heyday, but in 2010 it was a mega-hit that led its maker, Newtoy, to an acquisition by Zynga for $53 million.

What you may not know is that the company behind Words struggled in relative obscurity for years. In 2008 I wrote a post on TechCrunch about their first game, aptly called Chess With Friends, which included innovative social mechanics that set it apart from the pack. But the app’s download numbers were modest; maybe my post helped a little, but nowhere near enough to sustain the company, which had to take on external projects to pay the bills.

Newtoy’s followup, Words With Friends, launched in July 2009 and received coverage in several blogs including the iOS gaming site Touch Arcade, where it scored a coveted 5-star review. Despite this, the game’s performance was middling. With a month of runway left, Newtoy’s founders found their company on the brink of failure. So much for good press.

The news waxes and wanes in a predictable pattern.

Monday is a crushing onslaught that seems all-the-more forceful after the relative tranquility of the weekend. The torrent continues Tuesday; Wednesday holds strong but shows signs of abating, and the cycle decelerates through Thursday and Friday.

Each day is a cycle unto itself: mornings are heaviest, afternoons are lighter, and some PR people will beg for their stories to be published by 2PM PT, before the East Coasters leave work.

Friday mornings may see some action, but the waves ebb by noon as we all check out for the weekend. Watch closely come Friday evening, and you’ll see some corporate goons shoveling their trash into the receding tide just as the sun sets.

Too flowery? Here’s what you should know as a startup…

If I wind up in Hell then I have a pretty good sense of what to expect. It looks like my work desk: computer in front of me, phone next to it. Every five minutes or so (at semi-random intervals, so I don’t know exactly when it’s coming) the phone rings. It keeps ringing louder til I pick it up, so eventually I do, and at the other end a voice says, “I’ve got something I’d love to tell you about… do you accept the embargo?”

Not that this matters much to you (maybe you think I’m getting off easy), but I wanted to give a sense of how much reporters loathe embargoes. They’re the worst. Unfortunately they’re a fundamental part of the press cycle, so take my hand and let’s head down this path of drudgery before I find an excuse not to. Be warned: a misstep here can destroy your credibility with every publication and reporter you’re liable to encounter. No pressure.

Let’s start with some definitions.

An Exclusive is a promise to a reporter that you will give them, and them alone, the news you are pitching.

You can think of an Embargo as the opposite of an Exclusive — because it often involves briefing multiple reporters rather than just one — but the distinction is more nuanced than that. The real definition of Embargo is this: an agreement made by a reporter to withhold the story they are writing until a specified date and time. I’ll make this clearer shortly, but let’s tackle the easy stuff first.

If you’re running your own PR, then the Exclusive is your friend…

Hurry, this offer ends at an unspecified time in the future!

It has something for everyone, and it's smart. It's also laugh-out-loud funny... It's indispensable for startup founders, and they'll love it. Bloggers and reporters will cry over how perfectly it describes their frustrating lives. And PR people will groan and say it's all nonsense.

Absolutely a must-read. If you're a startup founder trying to figure out the press landscape, Jason's book is mandatory reading. Also, poetic, funny.

Since leaving TechCrunch he has consulted for firms across Silicon Valley, emceed the Startup Battlefield at TechCrunch’s Disrupt conference, and recently appeared as himself on the hit Emmy-nominated HBO show Silicon Valley — which makes this sentence fittingly repetitive.